Welcome to the second stop in Sensuous Promo’s Book Tour for Annette Bower’s, Moving On – A Prairie Romance. She has one fantastic prize she’s offering up on this blog tour. After you read about her book, stop by the bottom of this tour stop to find out how you can win a $10 Amazon Gift Card! 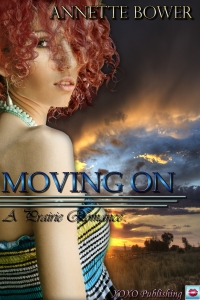 Regina Beach’s residents know everyone’s business and they are very interested in discovering Anna’s roots while she is enjoying being a mysterious business woman who drove into town. Nick, an injured sergeant in the Canadian Army, helps Anna feel safe and comfortable in her new environment, just as he has always done for his men in strange, dangerous places. Meanwhile, he focuses on preparing for his future physical endurance test to prove that he is capable of active duty.

Anna doesn’t talk about her loss, and Nick doesn’t talk about his future and therefore she is shocked to discover that his greatest wish is to return to active duty. She won’t love a man who may die on the job again. Intellectually, she knows that everything must die, but emotionally, she doesn’t know if she has the strength to support Nick.

Moving On, A Prairie Romance is about when life throws you a curve and the dreams you were dreaming are no longer possible. Anna and Nick both have to grieve their pasts and make a decision to move on toward a different life and different dreams. I believe that this is a universal experience. The parents dream of a child and as the child develops they notice that their child doesn’t react that same as others, they need to decide how to leave one set of dreams and move on to another dream. The same happens when a relationship fails or physical health changes or we lose a job or we realize a fortune we didn’t expect. These events change our view of our present world and we as humans, adapt the very best we can with the support systems we have around us.

This is Anna’s first view of the place she has come to change:

“The windows were dirty and the exterior paint cracked and flaked. This was just the place she needed if as they say, your environment reflects your state of mind. Maybe in this place they would get off her back. She locked the doors to ward off thieves from her black suitcases piled in the car. What was she thinking? The street was empty. Besides, a battered guitar case shared the passenger seat with empty water bottles and take-away food wrappers, so it looked as if someone had already rummaged through her belongings.”

Later when Nick is in this cottage with her they have this conversation:

“She was drawn to the large windows that revealed waves washing onto the shore while his voice rose and fell in the background. She jumped when he spoke from behind her. “Looks like you’ve got a big job to make this old man’s house a place you’d want to live.” He had picked up a ship in a bottle and held it to the light.

She stood with determined confidence. “They say work is good therapy.” She felt a pang of intuitive kinship with him again. She smiled, “Do you ever wonder if they really know what they are talking about?”

Nick raised his hand and gently touched the side of her face, turning it towards him. He looked deep into her eyes as if he was searching for recognition. “Yeah, they’re probably just a bunch of clowns who think up euphemisms to confuse the rest of us.”

Both Anna and Nick have to find their way out of their old dream that won’t work and into a new one.        A short except follows with their first community function.

“He handed her the dew-covered glass which she pushed into her lips. He clung to his bottle and tipped it evenly, watching her through half-closed eyes. She was an enigma. Pain and party. Her face had shown shadows of solemnity and joy of life.

He wanted to know her, but at the same time, not know her. Her pain both called to and repelled him. He didn’t want to complicate his life. Everything was fine the way it was. Besides, maybe he would be leaving soon, which wouldn’t be fair, or maybe he’d be the pegged-leg yokel staying in this town.

When he looked around, he saw his neighbors. Laurie had a bandana around her bald head. Hank’s right leg left a ridge in the dance dust on the floor. With a gulp, he reminded himself that a dance does not mean a lifetime commitment. He led her to the community table of singles. Ruth Anne was crooking her finger at him and smiling broadly. He had a job to do.

“Anna, we have a job to do.” She looked at him as if he had two heads.

“All the single unattached residents have to dance with the other singles so that everyone has a good time,” he whispered in her ear.

Before she could put her glass on the table, a round, short man reached up to her, squeezed her hand and led her through the polka. Anna watched out of the blur of fast stepping turns, while Nick held onto a blue-haired woman who smiled up at him.

After everyone at the table seemed to have had a spin with either Nick or Anna, he finally held his hand out to her and led her back to the dance floor. The line was forming as the music began. They positioned themselves behind the line and Nick slowly showed her the sequence of steps. He sensed when her body and the music blended together in movement.

Anna was no stranger to music but she was a stranger to the dance steps. However, the stomps, kicks and grapevines became less complicated with each repetition. She liked moving to the music. She watched the red boots and skirt of the woman in front of her. She saw the added swing of her hips and suggestive dips of her shoulder. Anna added these movements. When she glanced at Nick’s face, he smiled. She smiled back and tried harder to keep up with the line. During the next set, they held onto each other and swung in unison.

When they stopped at the bar this time they each had a glass of ice-cold water. She brushed the back of her sleeve across her mouth, wishing that he would trace the vagrant drops with his thumb.

She laughed. “You seem to be my thirst-quenching hero.”

“Water and hydration is a specialty of mine,” he teased.

He felt his stump which was cradled in his prosthesis throb. “I’m ready to sit out the next set. You?”

“I’d like to watch the moves. I seem to have missed this phase of dance.”

NOW ONTO THE PRIZE AND HOW YOU CAN WIN!!!

To be eligible for to win the $10 Amazon Gift Card, simply leave a message below with your email address and let us know what you think about Annette Bower’s Moving On – A Prairie Romance.

Learn more about Annette and her work: