Welcome to my 49th Birthday Celebration! Some folks are freaked out at the prospect of being “this close” to the big Five Oh, but not me. I couldn’t be happier. I happen to be one of those odd ducks who love getting older.

Okay so I don’t like the aches and pains that come with it, but the idea of reaching 50 and beyond doesn’t freak me out one bit. I have been through a lot during this lifetime and I wouldn’t change a thing. All of it has lead me to the place and the person I am today. I’ve had an amazing 23 year career as a veterinarian. I found my soul mate after giving up on ever finding him. I’m living my dream as a published poet and author several times over. I can’t complain! 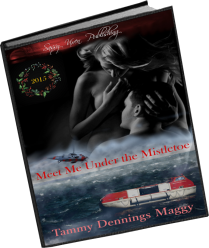 To celebrate this milestone in my life, I want to give away signed copies of my holiday novelette, Meet Me Under the Mistletoe. All you have to do is leave a comment and enter your information in the Rafflecopter. Now, this version of WordPress doesn’t allow the Rafflecopter to be in this same post. All you have to do is click on the link below and it will take you to a separate page to finish your entry.

That’s it! The giveaway is only open to those in the US and Canada for the print version. For all others, you can still enter, but the prize will then be for the electronic book version (EPUB or MOBI)

Click on the following link to get your entries!

Thank you all for helping me celebrate!

At the end of the post you can click on the special photo that will take you to the linky list of all the participants. This version of WordPress does not allow me to post the list here so the fun meme is the next best thing.

So here’s my eight for this week…

Her stomach clenched. She knew the wives of five of the fisherman on that boat. Two of them worked with her at the hospital. As one of the few registered nurses on the island, Jolene knew all the local families. Any kind of emergency brought them all together and it looked like today was going to be a doozy. Better get rolling. No point in trying to go back to sleep. Might as well head in and start my shift early.

She tossed the covers back and slowly slid her swollen feet into her fuzzy slippers. There was no way she’d walk barefooted over the freezing hard wood floors this time of year. Although at eight and a half months pregnant, the cold often felt good when they were as swollen as they were at the moment. She stopped her shuffle to the bathroom and slipped her right foot out of the slipper and onto the floor. The chill radiated up from the floor, taking her breath away, and that was before her sole even made contact. She shoved her foot back into the warm slipper and continued on with her morning routine.

The hot water of the shower worked out all the kinks in her back as she ran the washcloth over her ever-expanding belly. “Well, little one. Your daddy is heading out on another day to save lives. Don’t you worry, though. He’ll be here for our kiss under the mistletoe. This same time next year, you’ll be joining us there, but this time you’ll just have to settle for kicking him through my belly.”

In response, she watched as a little foot made its way across her stretched skin and gave her another kick. She smiled as tears rolled down her cheeks. These were the things Steve missed out on when he was underway. It’d taken them nearly ten years to finally get pregnant, and now she had to experience all the little things alone. Keeping a detailed baby journal helped her husband stay in the loop as did their Skype calls, but somehow it wasn’t the same.

Six other times she’d managed to conceive, only to have their excitement dashed a few months later with miscarriages. This pregnancy was the only one nearly to term and so far everything had gone without a hitch—for the baby that is. Jolene suffered from debilitating morning sickness for her entire first trimester leaving her on bed rest for most of it. Two weeks ago her doctor dropped another bomb. She had gestational diabetes. It wasn’t unexpected, but just one more thing to add to the list of issues she had to go through alone.

As the steamy water continued to work on her muscles, she remembered the weekend they conceived their baby. Steve surprised her in the middle of her shift at the hospital with a dozen pale purple roses. He had won the lottery in his unit and gotten an extra two days of liberty. Lucky for her, the other nurses had been more than willing to cover the remainder of her shift.

As soon as they’d made it through the door of their condo, he had tossed her over his shoulder and bolted toward the bedroom. “I’m going to taste every inch of your body until you beg for mercy.”

Meet Me Under the Mistletoe Blurb 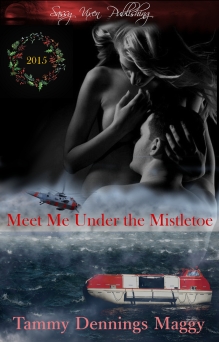 When Steve Sanders became a US Coast Guard Rescue Swimmer nearly twenty years ago, he knew he’d have to put his life on the line with each mission. Unfortunately, only three days before Christmas, Steve has to come face to face with the real possibility he’d break his promise to his wife and not return back to her and their unborn child.

Jolene Sanders is nearing the end of a difficult pregnancy and looking forward to finally spending their wedding anniversary with her husband. However, her holiday spirits are shattered when a distress call from a sinking fishing vessel calls the Coast Guard into action and puts her husband’s life on the line once again.

Left behind in a life raft during the rescue, Steve’s fate is now at the mercy of the wicked Bering Sea. Will this truly be his last mission, or will a miracle bring him back to meet his wife under the mistletoe?

Available only from Amazon (ebook and print)

So there you have it! I hope you had a great time here at this stop. Click on the photo below to go to the list to find your next stop!