Skip to content
Good day all!!
Since this is the first guest blog, I thought that I would start out by welcoming everyone who reads this and to give a great big thanks to Tammy Maggy for the invitation.  I hope that you’ll find there are no judgments, no recriminations and certainly no bigotry, in anything I write. This is just a little space to say what’s on my mind.  Not ranting and raving (it gives me a headache) but hopefully just common sense stuff so be kind, be patient and have (I hope you have) a good laugh with it. 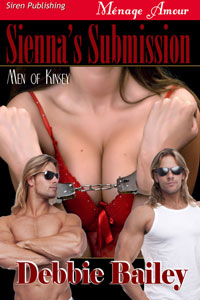 I was so proud and excited as I watched my first book climb the BookStrand best sellers list. Sienna’s Submission had been in my head for quite some time but I was a little nervous about putting in out there.  Getting in onto the computer wasn’t half as hard as actually sending it in to a publisher.  The fear of rejection was what had stopped me from doing it.  It wasn’t until a really good friend of mine read it and told me either I sent it in, or he would so after contemplating whether to just kick his ass or send the manuscript in I thought, what the hell.  And I will forever be in his debt for giving me that extra boot in the ass.
Living in Canada I wanted to write from a uniquely Canadian perspective.  Although we have so much in common with our neighbours to the south of us as well as England andAustralia, Canada is unique in both it landscapes and its people.  I love writing about small towns and how the people react to ‘out of the norm’ situations.  Having lived both in small towns and large cities, one would think that the larger the city, the more diversified the culture, the more tolerance you’s see.  But I have found just the opposite. Maybe it was how I was raised or the people I grew up with but generally it was a live and let live culture. My parents (both gone now) were probable the two most influential people in my life.   I was raised by parents who were very outspoken and involved in our community. Me, I’m got the outspoken gene, my middle brother got the community involvement gene and unfortunately, my older brother got the ‘you do really stupid things to get your ass sent to jail’ gene.
Yup, being the youngest of the three was pretty sweet.  I could watch my two older brother’s get in shit for things; then figure out a way to do the same thing and not get caught…lol!!!  Being the only girl, however, was not so sweet.  I had three very overprotective males (my dad and two brothers) to deal with; plus all my brothers’ friends who watched my every move.  So I learned as a teenager how to outsmart most males and as I got older I just got better at it.  My dad was a firefighter, and in our small town, all the firefighters and cops hung out together so getting into trouble was really difficult for me to do.  Not that I didn’t try, but somehow there was always someone who called my dad when I was about to do something fun and suddenly my dad was there or my brothers and his friends were there just trying the suck the fun out of everything.  But I do have to admit to having a special place in my heart for all firefighters and law enforcement officers.  There’s just something about the type of man that wears that uniform.
Our parents raised us to judge people by their actions and to always give our trust until it was broken.  It doesn’t work for everyone but so far it’s worked pretty well for me.
So I give my trust to my readers.  Enjoy life and next time you’re on a bus or train or even just sitting in a park, if you can, turn to the person beside you and say hi and ask them how their day’s going.  One way to stop violence, bigotry and just all round hatred is to get to know the person beside you.  Introduce yourself to the people in your neck of the woods.  Someone might just surprise you and become a good friend!!
Those of you that have read Sienna’s Submission; I hope you enjoy it as much as I enjoyed writing it.  My next book in the Men of Kinsey series comes out in February, 2012.  It’s Ryder, Sam and Dan’s story.  I’ve had a lot of people ask me if I was going to write about them.  For some reason Ryder grabbed the hearts and a few other place…lol, of people.
Sienna’s Submission is available at www. Bookstrand/siennas-submission.com if you want to take a peek into the town of Kinsey.

Have to weave in my ends yet but this prayer shawl is done. I used my left over #caronlattecakes #craftyauthor #knittersofinstagram #craftyvet #craftersofinstagram #stayhome