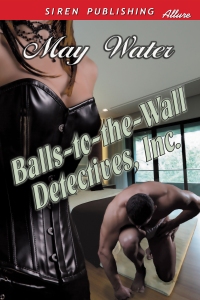 Once again, I’m happy to welcome back to Behind Closed Doors fellow Siren author May Water. Just yesterday, her latest book was released.  Balls to the Wall Detectives, Inc is an erotic alternative romance that grabs you right from the first sentence and never lets go! At the heart of it, it follows Marley Winters as she hunts down cheating partners and either helps them get back with their loves, or nails them to the wall for their infidelity. It’s a very interesting topic to cover in a romance novel. Not that there aren’t cheating partners, but how often do you come upon a private investigator who not only goes after the “cheater” but tries to help them mend their relationships as well? So why this topic? May responds:

While infidelity runs rampant in our society, with about half of all marriages dealing with it directly, you can avoid the likelihood of it ever happening. “It takes meeting several emotional needs at once,” says Dr. Willard F. Harley, Jr., author of several books on the subject and founder of marriage counseling center, Marriage Builders. When most reveal that sex isn’t what drives the affair Harley agrees it’s absolutely true, citing the lack of a romantic relationship causing many to seek others to fulfill their emotional needs.

“There are really four emotional needs that are primarily romantic: affection, intimate conversation, recreational companionship and sexual fulfillment,” says Harley. “If you have a romantic relationship in your own marriage, an affair is much easier to resist.” If you suspect your spouse might be doing something unsavory, Harley feels you have every right to investigate, whether by installing tracking software on the computer or even hiring a private investigator. If anything is found, Harley advises saving the evidence for the confrontation. “A husband and wife should be so transparent that any effort on the part of one to look at what the other is doing should never be considered off limits.”

I agree wholeheartedly! Having been through a divorce and now remarriage, I can fully attest to the fact that if you are missing any of the four emotional needs mentioned above, you become one very unhappy person. You begin to doubt yourself and your self esteem plummets. What happens when you have all four? Well, you have found your soul mate. It’s as simple as that.

What about cybersex? Is that cheating or just “harmless fun?” May’s heroine Marly Winters (dontcha just love that name?) has a few ideas about that. Here’s the blurb and an excerpt from Balls to the Wall Detectives, Inc. Let May know what you think about her new story, and better yet, go out and get your own copy today while it’s still at a special price! Currently it’s only available through our publisher Siren Bookstrand. Click on the cover of her book above and it will take you right to her page!

Her detective agency hunts down cheating partners, delivering not only evidence, but a remedy for what ails these couples: hot, sexual abandon. Her role as sex vigilante causes a brush with the law though. She’s crafty but can she get her ass out of that sling?

Despite her tough shell Marly unexpectedly finds love amidst the whips and chains. She really wants love, yet our heroine has loads of heartache to heal. Which one will help lick her wounds? Sweet younger Katie softens her spirit. Quirky lovable Jock literally knocks her off her feet. Can either one tame our excitable girl?

“Oh god yes,” Marly panted as she pinned Katie against the wall and ground into her. Both of them had to restrain themselves the entire half-mile walk back from the mall. They had barely made it up the elevator and into her dark apartment.

“I’m so fucking wet,” Katie whispered, nibbling Marly’s neck. When she licked the length of her throat, Marly moaned, unable to remember the last time she was that sexually excited.

“Me, too,” she panted, her mouth finding Katie’s again in the darkness. When their lips parted Marly whispered in her ear, “I wanna fuck you.”

“Do it,” Katie responded quickly. Marly backed away from her slightly, her hand caressing one of Katie’s breasts. Her eyes had acclimated to the dark, so she could just barely make out Katie’s face.

“Have anything? Like what?” Katie asked, quizzical. Marly bit her lower lip, suddenly feeling totally embarrassed.

Katie giggled. “Why would I have that?”

Marly shrugged her shoulders. “I figured that California gay women have all sorts of toys,” she whispered.

“What, it’s not true?” Marly asked with a laugh. Katie found Marly’s lips as she pressed her body against her. They made soft humping motions as they kissed. Marly ran her fingers through Katie’s long hair with one hand as she pulled down her tank top with the other. Her excitement grew when she realized that Katie wasn’t wearing a bra. She enveloped one perky breast in her hot mouth, loving that it was exactly a mouthful. Katie groaned as Marly sucked her tits more firmly. After a moment Marly lifted her head.

“How about pot? You must have that,” she whispered. Katie laughed out loud at her words.

“My god, Marly, you crack me up!” she replied with a huge smile. “But yeah, I do have toys. And pot. I was just teasing you. It’s all in my bedroom.”

Katie giggled, grasped a handful of Marly’s shirt, and pulled her to a room off to the side. There was a streetlight across the street, which illuminated the room just enough to not require additional lighting. As soon as they entered Marly pushed Katie gently onto the bed, lowered herself on top of her, and resumed her breast sucking.

“I love your tits,” Marly whispered in between her adoration.

“They’re too small,” she responded. Marly shook her head and gazed up at Katie, a nipple in her mouth. After one long suckle she spoke.

“They’re perfect,” she whispered, truly meaning it. Katie’s entire body felt so very good. The word that came to mind was sleek. Marly got lost in the removing of her new lover’s clothing and the lavishing of each body part revealed. It didn’t take very long considering she was only wearing running shorts and a tank top. Once Katie was fully naked, Marly made quite sure that no part of her was left unkissed. Both of them were breathing heavily.

“You make me feel so good,” whispered Katie as she fumbled with Marly’s jeans. Marly helped her out, shrugging them off her hips quickly. As she stepped out of them she gazed down at Katie.

“Your toys. Get one,” she whispered. Katie reached out to push Marly’s panties out of the way, but Marly grasped her wrist. “You can do that later. Right now I have to fuck you.”

May wanted to share one more thing with us before she left us to go back to her writing cave. It’s a quote from William L. Phelps that I think sums up relationships from the male perspective quite well.

“The greatest of all arts is the art of living together. Every man who is happily married is a successful man even if he has failed at everything else.”

Food for thought, don’t you think?

Where to find more from May Water

Coming up on June 7th, May will be a guest on our sister blog Sassy Vixen Publishing. She will share the first thirteen sentences from Balls to the Wall Detectives, Inc. Make sure you stop in there and tell her hello!

One thought on “Suspect Infidelity? It’s Balls to the Wall time…Oh My! with author May Water”