Hello my friends! Welcome to another Saturday Spotlight here at Behind Closed Doors. I’m Tammy Dennings Maggy and your host. Our guest today is fellow Siren author Tasha Blackstone. She’s here to tell us a bit about herself and to give us a little taste of her new fantasy/paranormal erotic romance Echo in the Night.  Today’s visit is only the first half of her interview. To get the next part, you’ll have to follow us over to Sassy Vixen Publishing day after tomorrow for Oh My! Monday.  So enough teasing. Let’s get on with the first part of our interview.

What inspires you to write?

I’m an only child and because my mom worked numerous jobs when I was a kid to support us, I spent a lot of time at my grandparents. I loved my grandparents but they were definitely aged and loved to watch the nightly news, 60 minutes and episodes of Hee Haw. I found it extremely boring and living in a world that was at the early, early stages of technology, my entertainment had to be created. It was during this time that I found my love of writing. I made up countless stories and over the years have found that my peace of mind can only be fully achieved when I am writing.

Are you a plotter or panster or a little of both?
A little bit of both, but I have to be careful. If I over plot, I lose the creativity and if I under plot, my scatter brain ADD causes me to forget important details.

Do you listen to music while writing?
I have to. Lol I don’t have my dream writer’s cave yet and my house tends to be hectic with kids and husband and dogs running around 24/7. If I don’t plug in, I get nothing done.

Tell us about the different types of characters you like to write about? Why are these types so appealing to you?
I really like to write about the broken heroine and the morally conflicted hero. The heroine needs to be strong enough to survive on her own, but I’m drawn to the shattered aspect because a perfectly normal character is a little boring to me. I also love the conflicted hero. A man with a dark past, or questionable character, who can find redemption in choosing good or sacrificing himself for love. I find these types of characters to be more enjoyable to write because in reality, most of us are a little broken and little bit dark.

What are your favorite fiction genres to read from?
It’s basically a tie between Fantasy/Paranormal and Mystery/Crime drama. I love Faeries and Witches, supernatural creatures, and mermaids, and of course Vampires of all makes and models, however, I am also a murder mystery, suspense thriller junky!

Who are some of your favorite authors and why do you think they appeal so much to you?
I have been a dedicated Stephen King fan since my early teen years. My grandma turned me on to his books and Carrie was the first book to give me nightmares and when she passed, she left her Stephen King library to me. I’m also a huge fan of Terry Goodkind and have read every one of the Sword of Truth books numerous times. I love both of these authors, and those like them, because they ignore boundaries. King is so open and honest and willing to write about subjects that most would shy away from and Goodkind created such a fantastical world and also pushed the boundaries to the point of being controversial.

What kinds of stories are your comfort reads when you are sick or feeling low?
In complete opposition to books like King or Goodkind write, when I’m sick or blue and just want ot o curl up with a good book, I turn to YA novels. Yes, I’ve read the Twilight saga. Three times. I was also introduced to PC Cast’s House of Night series and went on strike for a week to read my way through the series.

Want to know more about Tasha? You’ll have to join us on Monday for the rest of the interview and a smokin’ hot adult excerpt.  Don’t worry. I do have the blurb and a story excerpt to share with you. Tasha and I don’t want to leave you hanging! 😉 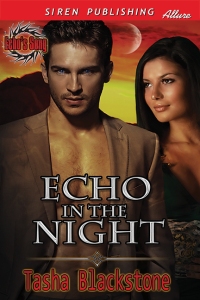 Can a Witch who was born to be a Vampire Hunter find true love with her mortal enemy?

It’s easy to live life on auto pilot and that’s just what Echo Abbott is doing. That is until everything shifts. As her house of cards begins to crumble, she meets Henry Knight. Obnoxious and gorgeous she can’t stop thinking about him and against her better judgment she wonders if he is the key to healing her broken heart.

In this dark, seductive tale set in the heart of Oregon, Echo is a Witch with remarkable powers whose gift is sought after by a power hungry Vampire, Corrine. Corrine’s brother, Henry, is a willing pawn in her fight for the ultimate power and has been tracking Echo for years. Seeking out Echo’s weakness he soon finds his desire for her is more than he can control. He wants Echo all to himself, but can he convince her that he isn’t the enemy before it’s too late or will her stubborn nature be her downfall?

“Oh my God! I’m so sorry!” A large man with muscled arms and strong hands lifted her effortlessly from the glass battlefield. “I didn’t mean to scare you! Are you okay?”

Suddenly more pissed than scared, Echo wriggled and screamed in his embrace, trying with all of her might to break free from his hold. “Put me down!”

Gingerly and on command, he did, but as her foot found the deck, she pushed a shard of glass deeper into her heel and cried out again, “Pick me up! Pick me up! Take me inside!”

The stranger quickly swooped her up back into his arms and with rapid procession, carried her into the house and set her down onto the kitchen counter. Without a word he grabbed a towel from the oven bar, soaked it in warm water and tended to her foot, pulling out the largest shard of glass that had impaled her. She screamed and kicked at him as the pain pulsed through her and as he dropped the sharp triangle on the counter beside her, Echo could feel the familiar sensation of warm blood dripping down her foot. With an eerie swiftness, the man backed as far away from Echo as he could without stepping back outside.

His face was ashen and there was a quiver to his voice that oddly enough set Echo at ease. He was tall and muscular with broad shoulders and a chiseled chest, easily defined even through the fabric of his gray button-up shirt. His hair was raven black and clean cut and he had the hint of a five o’clock shadow on his face. His thick eyebrows were arched in alert and his crystal-blue eyes had locked onto the droplets of blood that fell to the tiled floor. He was a beautiful mess.

“Who are you and what the fuck are you doing here?”

He did not pull his eyes from the blood when he answered. “I’m Henry. I’m here to buy your house.”

“You have got to be kidding me! Henry?” Rage pulsed through her. “As in Henry Knight the douche bag stalker who refuses to take no for answer and just leave me alone? That Henry Knight?”

He finally looked up into her eyes, a hint of a smile etched along his full lips.

“Well”—he laughed—“Most women don’t refer to me as a douche bag, but yes, I suppose I am that Henry.”

New to publishing, but not new to writing, Tasha Blackstone has been spinning tales ever since she was a little girl with an overwhelming imagination. She has spent her life weaving stories, but found a love of romance back in high school when she filled her time writing fantasy love stories for friends and classmates. Though she only writes part time for now, she hopes to someday be able to write full time. When she isn’t pounding away at the keyboard, Tasha spends her time with her best friend/husband, her three teenaged kids, and her two drama queen dogs. Life is busy, overwhelming, and hectic at times, but it’s all worth it. During the late night hours, when all is quiet, you can find her working on her next work-in-progress or curled up with a good book and bottle of tequila. Yes tequila, she hates wine!

Where to Find Tasha